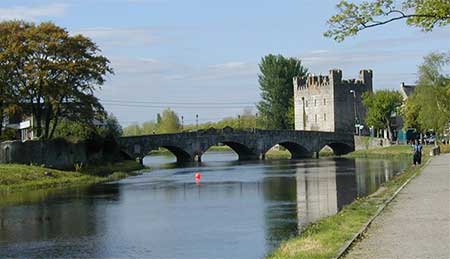 Kildare is situated in the province of Leinster just west of Dublin, making it an ideal base from which to commute into the capital city. Because of this it is one of the more densely populated rural counties of Ireland with a quickly growing population now approaching 200,000. The area is well-served for motorists requiring to going west or into Dublin with both the M4 and M7 motorways going through the county.

The Curragh horse-racing course, which hosts all five Irish classics is situated in County Kildare, as are 2 other courses Punchestown Racecourse (home of the National Hunt Festival of Ireland) and Naas Racecourse. County Kildare is famous for the quality of horses bred in the location at farms such as the Irish National Stud, the Moyglare Stud and Kildagan Stud. Kildare likewise has famous sporting links with the game of golf. Amongst the many high quality greens in County Kildare, the most famous is the K Club in Straffan where the 2006 Ryder Cup team challenge was played, closely followed by the PGA National course within the Palmerston House nation estate.

The largest town is the county town of Naas. Newbridge, Celbridge and Leixlip are the next largest towns, and all three are embeddeded in picturesque areas but are just minutes from fast motorway connections. Maynooth continues to be charming with its historical academic establishments, the second earliest university in Ireland now called NUIM, and Maynooth College which is the national RC seminary.

What to Do In County Kildare

There are no shortage of things to see and od in County Kildare, some of the attractions include:

Kildare Maze.
Leinster’s biggest  maze is an incredible tourist attraction situated simply outside Prosperous in the North Kildare countryside. The maze is focused on supplying a difficult and amazing day out with excellent old fashioned fun.